Spaceframe manufacturer India | metalkarma.in > Airports Building
An Airport Terminal building is the most significant interface between ground access and the aircraft. Growth in aircraft traffic and the introduction of larger aircrafts have influenced the service life of airports.
In the context of the robust growth of the country economy, the need for Airport terminal buildings is felt to keep pace with the rapid increase in air travel and development in the infrastructure of airports as well.
Objectives of an Airport Terminal Buildings:
The four basic objectives of airport terminal building are as follows:
 Operational efficiency for processing of passengers and their baggage
 Providing Ample Parking space for aircraft
 Adaptability to implement innovations in aviation technology
 Security
Key Planning Issues in building an Airport Terminal Building:
Depending upon the ongoing trend analysis and survey, followings are the Key Planning Issues in building an Airport Terminal Building:
• Growth Rate for Traffic at Terminal buildings:Passenger traffic is the key parameter, which needs to be estimated or forecast appropriately for capacity planning.
• Peak Hour Projections:An Airport Terminal building and its facilities therein should have sufficient space to cater to peak hour passenger traffic at the airport.
• Level of Services in Target Year:Level of Service Standards and associated criteria to evaluate the level of service is a rather complex issue. Passengers are concerned with completion of air journey at a reasonable cost, with minimum delay, and inconvenience.
• Cost of Construction:The design and approach towards Airport Terminals have undergone a radical change. Earlier, a terminal was a building where a passenger commenced and concluded an air journey. Currently, a lot more is expected from an airport terminal building – not only it should be functionally efficient, it should also be aesthetically and architecturally appealing to view.
Airport space frame structures are planned for maximum efficiency, convenience and economy.
The main objective is to impart space for line operations, facilities for passenger’s convenience, office for the airport management as well as non-aeronautical functions.Since 30 years, the company Hindustan Alcox Limited emerged as leading airport steel structure manufacturer in producing well engineered and aesthetically appealing airport terminal buildings. 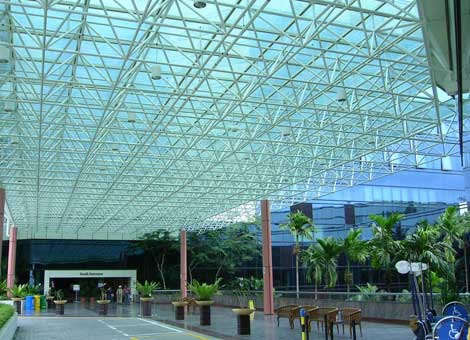